The power of exercise

Dear Friends – I’m certain other sufferers are likely to have beaten today’s personal achievement of better than 10,000 steps every day earning points for HCCN in the NHS campaign to raise healthy awareness of the importance of regular daily exercise to overcome the effects of cancer treatments in cancer patients.

We all probably, even unconsciously, make achievement targets in our daily lives, especially when overcoming various illnesses, like cancer. My personal target has, from the start, been to win a “gold medal”. Well, a little earlier I passed my 5th “gold medal” almost unnoticed! Then I realised that every “point earned” represented 10,00 steps per day. So I reset my target to reach 1 million steps – a sensible motive I thought! But I’m numerically dyslexic and had to use a calculator to find when that target was likely to be. But dyslexia caught me out! My millionth step was actually a TEN MILLIONTH achievement earlier today! Plus 5 golds (nearly 6), 3 silver and 2 bronze!

But I won’t stop now and as these daily walking efforts (all outside, twice daily regardless of good or bad weather) I’m assured are proven to reduce the possibility of cancer returning, by about 85 or 86 percent! My last prostate cancer review was a couple of months ago and seems to have stayed dormant!

So, in my ignorance, having hugely exceeded my “Millionth Step” by a factor of ten – making TEN MILLION STEPS, my new and only target must simply be to: KEEP UP THE TWICE DAILY ALL WEATHER, ROUGH TERRAIN WALKS – AND KEEP CANCER AT BAY!!

My grateful thanks to all the wonderful oncology team at Woodlands (Hinchingbrooke Hospital) Macmillan, the wonderful HCCN charity team of consultant, nurses, therapists, instructors and support staff, for so actively providing the very special care to any cancer patient in Huntingdonshire – including our incredible high tech experts and friends, at Activ8rlives (Aseptika Ltd based in St Ives).

I, myself and many, many fellow cancer patients, have greatly improved lives as a result of your collective ministrations, equipment, special guidance, care and love! 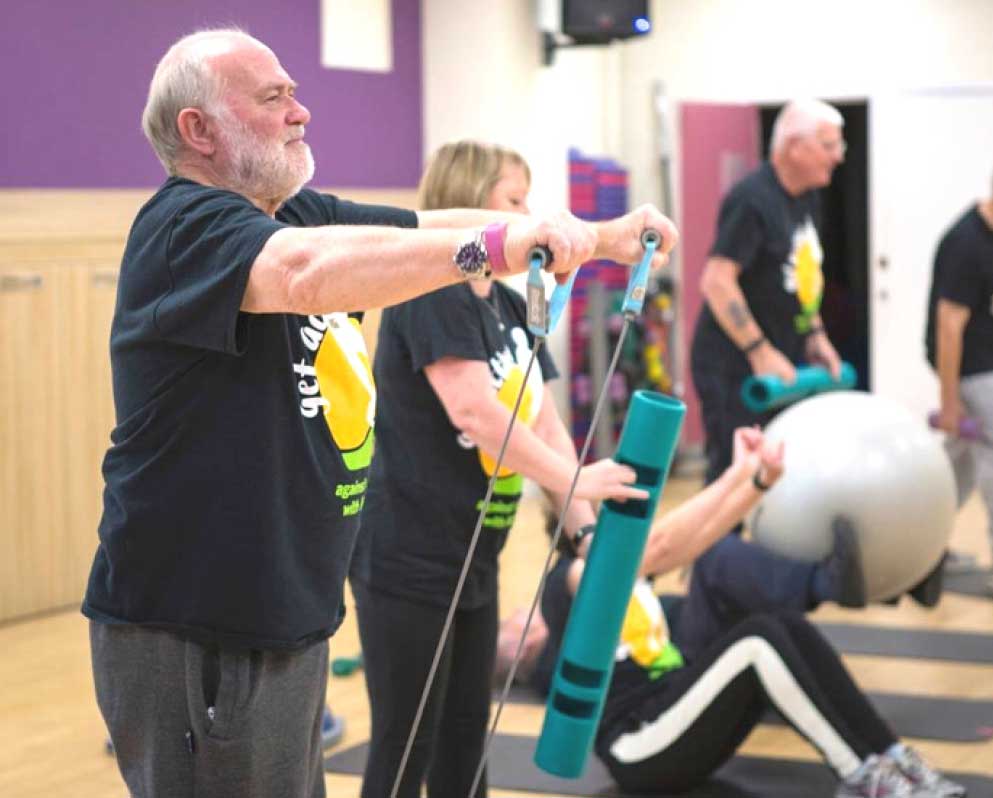 So, you know that feeling you get when you ride on a rollercoaster? That part where your stomach drops away and you get turned upside down. That is what happened to me, minus the rollercoaster and the fun part. I only went for a mammogram because of a clinical trial that my Mum was involved in at Addenbrookes. I never felt anything, saw anything, or imagined for 2 seconds that anything would come of it, but it was peace of mind ……..

My life changed at that very first appointment and things got progressively more serious from there. Several biopsies later, followed by ultrasounds, MRI scans, mammograms and they confirmed my worst fear. I had breast cancer. The reassuring part was that it was treatable, so, after many more appointments and consultations along with guidance from my consultant, I opted to have a double mastectomy with immediate reconstruction. My surgery took place 17th December 2020 and I was out just in time for Christmas.

During surgery they took some lymph nodes for testing, and you guessed it, at my follow up appointment I was told that they were positive for cancer. I was in shock. How?? At this point it felt like everything around me stopped. I went for a full lymph extraction at the end of Jan, but I had distanced myself so much from what was happening, that I really felt so empty and alone. I was scheduled to have chemotherapy in March 2021 once I had recovered enough from the rounds of surgery. Covid was at its peak, and I was stripped of any social interaction at a time when I needed it most. My positivity was dwindling, and I was coasting, then I met Sandra. This was a definite turning point for me. I didn’t have to be brave with Sandra; I could be honest. I felt like she had scooped me up, hugged me and given me the ability to breathe again. It was like I had been under water up until that point.

Sandra came to my house and did my bloods, helped me out when I had to attend A&E, prescribed medication and provided acupuncture. The acupuncture that was delivered through the charity helped me to control the hot flushes that were happening as a side effect of the treatment and medication. I was finding them too much mixed with the fatigue from radiotherapy. This service was unbelievable and undoubtably made a positive difference to me. Last and by no means least Sandra was like the friend that I needed, the one who understood and who never judged. The continuity of care meant that we got to know each other, and my support always felt personalised. I will always remember the kindness that all the HCCN nurses and staff have shown me at the most vulnerable time of my life. My treatment is ongoing, and I still receive support from the nurses every month, which is invaluable.

I now feel like I see life differently, and I am determined to live the best life I can.

I am running London Landmarks Half Marathon in April 2022 to raise money for this amazing charity as I know that without their help things could have been quite different. 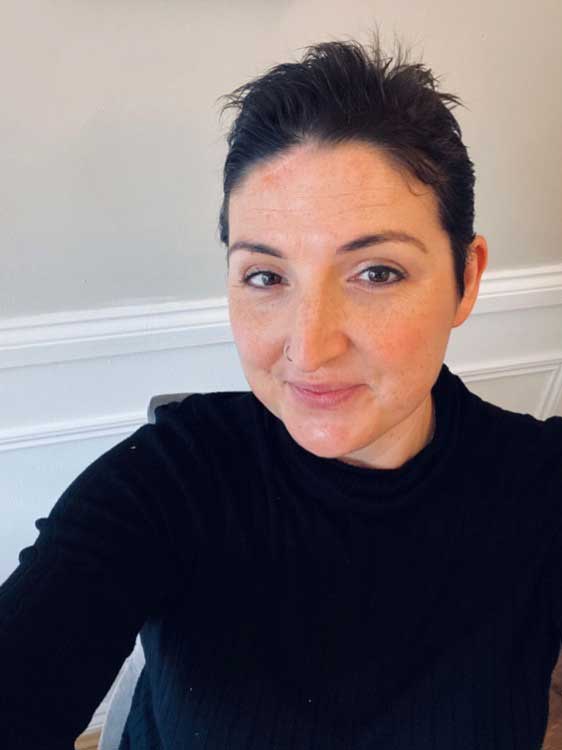 A patient’s perspective on HCCN’s Patient to Person programme

Mahalia participated in our third programme, taking place in September, October and December 2018. She lives in St Ives with her husband and young son. Mahalia was diagnosed with breast cancer in 2009 which was treated with surgery, chemotherapy and radiotherapy. In 2012, Graves’ disease was diagnosed: an autoimmune disease that affects the thyroid. Having passed her 5 year all clear anniversary, Mahalia developed secondary cancer in her hip. She now receives daily medication and 6 monthly scans to monitor her progress.

Having approached the HCCN lead nurse, Karen Moseley for a referral to a counsellor, Karen recommended Mahalia attend HCCN’s Patient to Person programme. I met with Mahalia to understand the impact this has had on her emotional wellbeing.

The programme has left her feeling hopeful and striving to be the best she can be. For some time, she had been ‘clinging to the old person – the person who she thought she was’. The experience of cancer had ‘opened a door’, and she needed to break old habits of feelings and behaviours. “I feel like I can’t talk about it (the cancer) with others because they want me to be well”. Mahalia’s experiences had left her feeling emotionally drained and ill-equipped to move forward. She described herself as being very ready for the programme.

The trusting and safe environment established by the two facilitators was key to enabling Mahalia to get to know a few people very deeply and a strong bond was forged. The first day included a powerful mindfulness exercise resulting in landing in ‘a strong and peaceful place’, ready to learn about a fundamental building block of the programme: the living scale. This provided a powerful representation – both physical and sensory – while not being judgmental. “The way the exercise was set up enabled me to step back, accepting my feelings, identifying what helps – wherever you are on the scale – between having a great day or a bad day, and that you have choices”. The deeper discussions helped Mahalia to understand her thinking and to express herself with others; become accepting and encouraging her to be her own ‘best fried’; to look after herself. “Even now, when I feel down, I know I have choices.” She felt ‘normal’, not the ‘ill person’, not having to be careful about what she revealed to whom. Being in the group was an important aspect, she felt able to ‘park’ her cancer diagnosis, but if the subject arose, it was not a problem.

The small group work allowed her to go deeply into herself – she valued the opportunity to validate and recognise many things that she knew to be true. The pace of the ‘work’ was like walking into a deep pool a step at a time, rather than diving in, and she felt she got a lot from taking those steps with other group members by her side.

‘Homework’ between the modules enabled Mahalia to experiment, trying out the tools identified in the exercises and personal to her, to practice making small changes in thoughts and behaviours, leaving her feeling freer and able to make choices, therefore having a large impact. No longer feeling paralysed. For example, when she visited her mother and the conversation became over analytical and critical, Mahalia felt able to break the cycle – standing up and changing the subject. Recalling the living scale and feeling a new confidence to experiment, she was mindful in her choices and lifted the judgement. She also made time for coffee with a friend and felt able to cancel the arrangement as she did not feel well enough to go, but also did not feel responsible for the friend’s reaction and feelings. In fact, she felt a closer connection with her friend having been open and honest in this way.

Another example is that she feels able to ‘allow the lightness to come back in – shining a magnifying glass on what I need to do’. “I don’t feel like a victim”. Moving forward from habitually being the one looked after, she now makes suggestions to her family and connects more with their lives, going from ‘just about managing’ to building happy memories with them.

By module 3, which covered common thinking traps, she felt she was bringing something useful to the group. Her self-awareness had increased – valuing the things that are good for her soul. “Now I feel hopeful and positive. If I have for example a terrible migraine, I know it’s finite, it will pass, and then I can choose to do something nice. I feel able to ask for help to manage around the house. And that feels OK. Whether I feel angry and resentful, or happy and peaceful, or anything in between, I don’t over judge myself, I talk to myself, I coach myself. I also sleep better now”, she added.

Since the programme, Mahalia has become more aware of the other programmes and activities offered by the HCCN charity. As an example, she now attends the weekly drop-in at Ellington, taking part in the water colour painting class and receiving reflexology. “I am doing something for me, and see others responding positively”.

“Pleased to be able to donate £40 to HCCN today for the brilliant service that you provide.

I have been attending the online zoom Yoga with Cherie all through the pandemic and it still ongoing which is wonderful.

Also, big thanks too to Lynne for the fabulous relaxing reflexology for me over the last few months as it truly is an hour of bliss.

What a wonderful service and long may it continue.”

“The complete care ethos provided by HCCN makes the cancer treatment journey much easier to cope with. The personal visits from the support nurses, the yoga and the exercise classes, the acupuncture sessions, the conference days.” Jim Smith

“Absolutely fantastic ladies who are always there for you. A real high level of care given. The courses and conferences are so informative and relevant. I really can’t praise them all enough.”

About Patient to Person:

“It was a very positive experience.  Meeting others who can really understand what you have been through is helpful.  It helped me to consider what is most important in life and to move forward.”